The tradition of the choirs in Maramures is about 200 years old. There are documents that prove that, throughout the years, there were more than 100 peasant choirs and some cultured ones too. The way of expressing the spirit through choral harmony the joy of singing are reuniting the voices of 45 souls under the baton of Mihaela Bob Zaiceanu, the conductor (teacher of music) the result being a young choral association. “Young” if we are talking about this formula because in Armonia choir there are 5 members of the ex professional choir The friends of Music (1976-1990) ) and 11 members of the ex choir Capella Rivulina (1981-1986, 1990-1997) belonging to the education trade union. Both these choirs have had wonderful records, taking part into internal and international competitions but, unfortunately, they do not exist anymore.

In 2001 ARMONIA Choir was founded to bring joy to its members and to the lovers of the choral art, and in 2005 the Association „Prietenii Armoniei”/”Friends of Harmony” was founded.

The name was chosen because of its symbol: ARMONIA (in anagram it is written ROMANIA) and it tries to put in good use all the amazing and simple aspects of this word: HARMONY:

– in music (through interpretation);

– through tolerance (orthodox people, Greek-catholic, protestant, roman-catholic and Adventist ones);

The repertoire of the choir is made up of lay and religious choral songs written by Romanian and foreign composers (at the moment only 36 songs from the universal and Romanian classical creation, 51 choral folklore arrangements and 72 Xmas carols). Part of the songs are performed with soloists who also sing some leads accompanied by piano or organ.

In 2002 there were 10 concerts with audience, the most important being the one that Rotary organized for raising funds for the poor children. In 2003 there were 23 concerts and in 2004 there were 25 out of which two were vocal-symphonic ones in cooperation with Euroart orchestra. In 2005 there were 40 concerts (4 in Brazil), in 2006 there were 27 concerts, in 2007 there were 29 concerts (10 in Israel) and in 2008 there were 33 concerts. In 2009 there were 28 concerts, Armonia Choir being invited at Opera House Ball in Cluj Napoca wich took place on January 17. There were 7 more concerts in 2009: 3 at the Black Sea, celebrating Easter and other 4 in China. 2010 begin with a celebration concert on the 15th of January for the Romanian poet Mihai Eminescu. Until September 2010 there were other 7 concerts. For 2014 we are preparing the forth edition of „Liviu Borlan” International Choral Festival.

From the beginning until now Armonia Choir had over 300 concerts as follows:

In the international ground we realize intercultural exchanges with similar groups:

From the technical point of view the apportionment on voices is as it follows: 18 sopranos, 13 altos, 11 tenors, 3 baritones and 6 basses. The conductor of the choir is prof. Mihaela Bob-Zaiceanu and as assistant Anamaria Ştefan. The choir also has a technical staff. The rehearsals take place once a week and they last for two hours.

The choir exists under the aegis of CCI Maramures (Chamber of Trade and Industries) and it’s at their headquarters where the rehearsals take place. The president of the choir is Mrs Mariana Macarie, and the executive director is Mr. Alexandru Nicolici.

The scenically presentation consists of two outfits, one with traditional blouses and one with white blouses.

Although Armonia Choir is by its members, the only successor of the Choir Friends of Music (professionals abolished in 1989) and of the Choir Capella Rivulina (abolished in 1997), it doesn’t seem fair to take for ourselves the long line of previous awards and tournament activity. The attached list, to aggregate all the concerts under the name „Harmony” and diplomas obtained at City Hall Uppsala (Sweden), Pirapora (Brazil), Jerusalem (Israel), in addition to many others in Romania, we believe that with more than 50 DVDs represents us with honor. 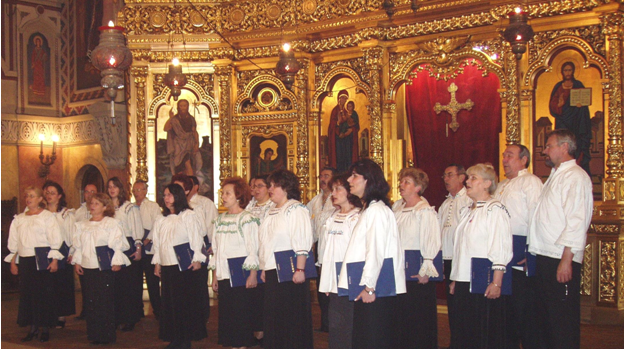 Artistic Director of the Festival